Yesterday I saw Judy at the Cinema, a film about Judy Garland with Renee Zellweger. 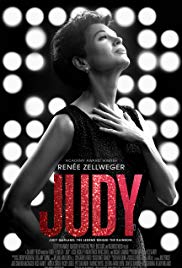 “Thirty years after starring in “The Wizard of Oz,” beloved actress and singer Judy Garland arrives in London to perform sold-out shows at the Talk of the Town nightclub. While there, she reminisces with friends and fans and begins a whirlwind romance with musician Mickey Deans, her soon-to-be fifth husband.”  Google.

The film starts in the US where Judy is travelling and performing late at night with two of her three children to make ends meet.  It alludes she was abused whilst a young actor, and that she was given pills to keep her awake/sleep/control her appetite which she later became addicted to.  She is forced to make a decision to leave her children in the US with husband no. 4 so she can make some money in England where she had a good reputation.

The film is set just six months before she passed away aged 47.  I hadn’t known any of the history, so it was interesting but quite sad.  It was slow in parts but Renee Zellwegger was a good choice for Judy, and I enjoyed the songs.   6/10.