Since the age of 14, David Bowie has been my favourite singer.  Last night I saw the Bowie Experience at Sunderland Empire. 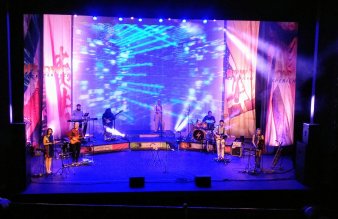 I was fortunate to see David Bowie live for his Outside tour at the Metro Radio Arena, Newcastle (7th December 1995).  The turn out was poor (the worst I’ve ever seen at a concert – I think earlier fans were not so keen on this album – wikipedia says there were 11,000 present), but this was great for me as I managed to get to the third row in the standing section with a clear view.

The Bowie Experience show I saw last night was fantastic, and I would recommend it to all Bowie fans.  It was a professional show, with great sound quality, and costume changes every few songs.  The singers voice was brilliant, as were the song choices.  I  did not want it to end, and I’d like to see them again.

In the past year, I’ve seen Absolute Bowie, another tribute band twice (once in York, and once in Newcastle – both in bar venues).  They are also very good.  The singer looks similar to David Bowie – tall, thin, with the same facial expressions, except when he smiles.  I liked the chemistry and dancing between the singer and lead guitar player, and this singer came across more confident/relaxed than in the Bowie Experience (perhaps due to more experience).  Some of the scenes and clothing in this show were almost identical to the Bowie experience – for example the big white silk gown and skull scene.

Before David Bowie died on 10th January 2016, he created a musical called Lazarus, which ran in New York in 7th December 2015 to 20th January 2016, and then in London from the 8th November to 22nd January 2017.  I’m so disappointed I didn’t see it advertised until it was too late to attend, especially so as the lead was Michael C. Hall (a.k.a. Dexter).

Whilst writing this post I enjoyed listening to David Bowie songs on YouTube.  Music is so powerful.  I enjoyed old favorites, and finding new ones including Cat People, which I can’t believe I’ve never heard.

Do you like David Bowie?  Have you seen any David Bowie tribute bands?