On Friday, I went to see Rocketman, a film based on Elton John’s life, described as “A musical fantasy about the fantastical human story of Elton John‘s breakthrough years”. 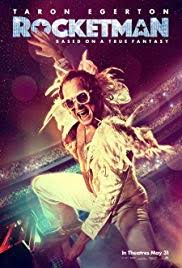 The soundtrack is brilliant, as is Elton’s story about his rapid rise to fame, and his openness around his struggles with not being able to be his true self. I was surprised Elton is so open about his relationship with his parents, portraying them as both uncaring and selfish. It’s good to know he has finally found love, and remained friends with his long term lyricist Bernie Taupin throughout.

From being raised in a council estate, Elton has gone on to sell more than 300 million records worldwide, making him one of the best selling music artists in the world. He has more than fifty Top 40 hit’s, as well as seven consecutive number-one albums in the United States. His tribute single “Candle in the Wind 1997”, re-written in dedication to Diana, Princess of Wales, sold over 33 million copies worldwide and is the best-selling single in the history of the UK and US singles charts – wow. (Source: Wikipedia).

I liked how the film ends showing picture of the actors next to pictures of John and his family and friends when they were younger – demonstrating a true attention to detail. Well worth a watch. 7/10.

Have you seen this film? What did you think?